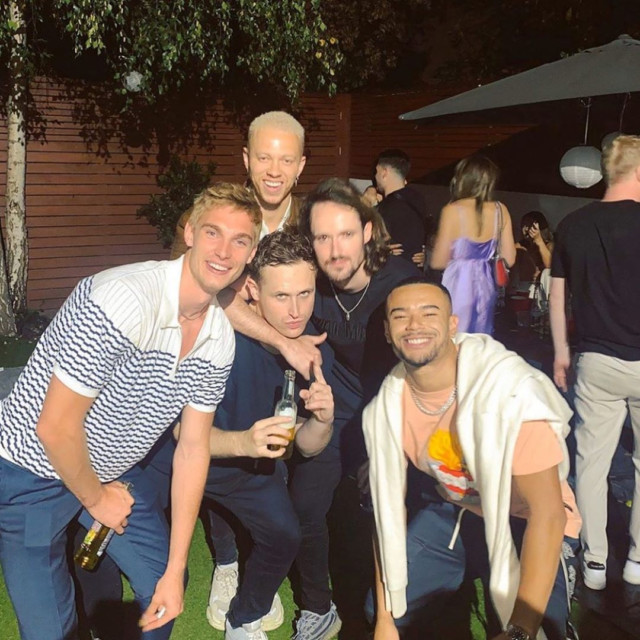 After enjoying a trip to Saint Tropez with his famous father and family, the eldest of the Morgan boys made sure to celebrate in style.

Spencer has his arm wrapped around one of his pals, as Wes Nelson kneels down to pose for the photo.

It appears they are in his backgarden in this photo – as the other pictures take place within his house.

His pals gathered around and they hugged together for another group shoot, with one of the pals holding a red cup in his hand.

In another pic, Spencer is holding a magnum of champagne as his friends laugh either side of him. He had a big birthday party with his pals Spencer with a magnum

Then in the final image – after the carnage of the party – it shows a Captain America shield with an Iron Man helmet.

He captioned the pics: “Birthday weekend very very nearly finished me off. Thanks for all the love”

In a photo at the weekend, Spencer lamented how he is still single and can’t drive, writing: “27 years old. Still single, still can’t drive and still look like I spent 2 years on a desert island… at least I can blame this year on a pandemic

His Good Morning Britain presenter dad paid tribute to his eldest son over the weekend with three throwback snaps.

In one, he puts an arm around his young son’s shoulders as they posed in front of a flashy orange Lamborghini. Some Avengers presents left over In the second Spencer wore shades in between brothers Bertie and Stanley and remained stony faced.

While the most up to date one saw Spencer with much longer locks beside his famous dad.

Piers wrote: “Happy 27th Birthday @spencermorgan – it’s been an emotional journey for your shades & hair…. just a shame you forgot not to smile in the top pic.

Did you miss our previous article…
https://www.hellofaread.com/love-island/pregnant-dani-dyer-arrives-home-as-shes-spotted-for-the-first-time-after-making-her-shock-baby-announcement/

Boris Johnson surges with Sun readers as more than half say they will vote...

Nicola Sturgeon to be grilled by Andrew Neil on her plot to force Labour...