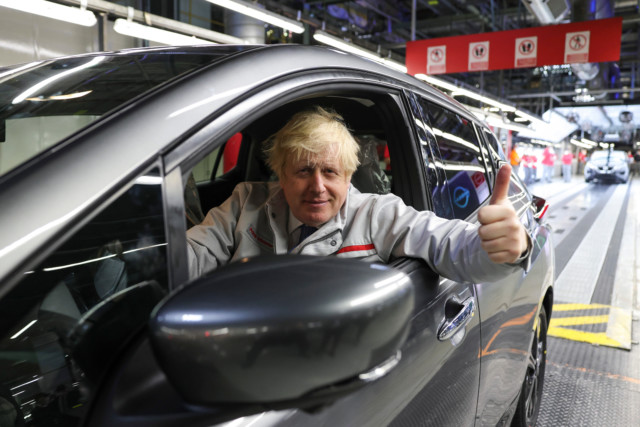 BORIS Johnson has claimed the creation of thousands of car-making jobs will supercharge a green industrial revolution.

The £1billion project will bolster Nissan’s workforce in Sunderland by more than 1,600.

And there will be 4,500 new jobs in the supply chain as the Japanese giant builds a new-generation all-electric vehicle in the North East.

The PM, on a visit yesterday to the site, beamed: “This plant makes more electric vehicles than virtually anywhere else in Europe.

“It’s a fantastic vote of confidence in Sunderland, in the North East and this amazing workforce here. It’s an important step forward for our green industrial revolution.”

Business Secretary Kwasi Kwarteng congratulated locals for “the confidence they expressed in their country when they voted for Brexit”.

Sunderland Nissan’s CEO Ashwani Gupta claimed the opportunity was down to breaking with the EU, saying: “Thanks to Brexit, Nissan is moving forwards.”

The project will bolster Nissan’s workforce by more than 1,600 Kwasi Kwarteng thanked locals for their confidence when they voted Brexit

The company will build a new electric model and battery plant with financial support from the Government, giving a major boost to the industry.

The car will be a cross-over vehicle but it is not known when production will start.

July sees the 35th anniversary of the plant building its first car and Mr Gupta said: “This is a £1billion birthday present for colleagues here.”

Boris Johnson still sick with coronavirus & staying in isolation but warns Brits NOT...

Coronation Street’s Leanne Battersby to be forced to dress as a nurse to sell...