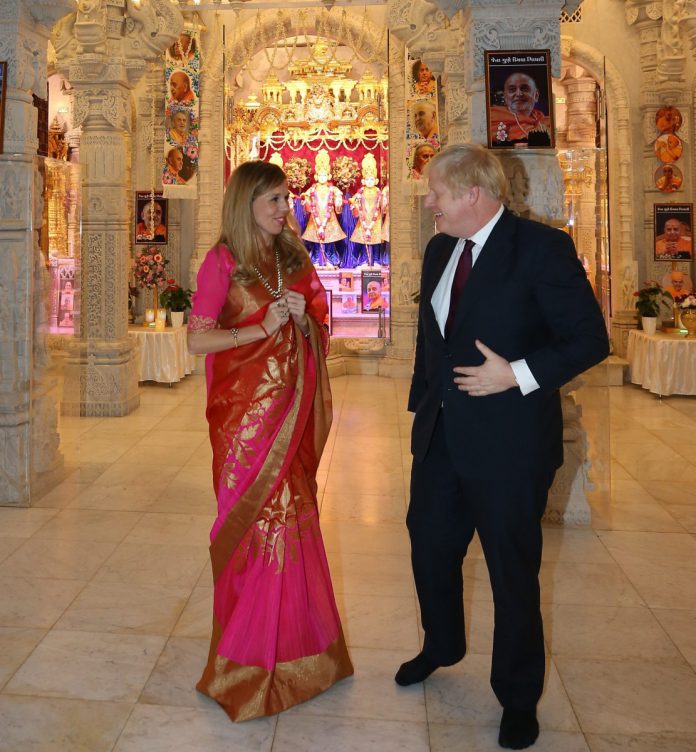 CARRIE Symonds wore a sari as she joined her boyfriend Boris Johnson the campaign trail for the first time.

Ms Symonds, 31, wore an eye-catching hot pink shawl as visited a Hindu temple with the PM in Neasden, North London.

The couple smiled at each other as they stopped for a photo in between meeting worshippers yesterday.

Mr Johnson, 55, has faced repeated questions about his relationship with Ms Symonds but has beaten them all away.

The BBCs Naga Munchetty grilled the PM on his private life and relationship while Lib Dem boss Jo Swinson blasted this week that he could not protect our family of nations, because we all know he is not a family man.

But while Mr Johnson faces questions over his relationship he has received a boost from a recent poll that puts him 11 points ahead in the race for No10.

The Tories now have 44 per cent of the vote, with Labour lagging behind on 33 points and the Lib Dems on 11, the Daily Mail reports.

Boris has told voters that backing Jeremy Corbyn would lead to another Groundhog Day nightmare.

Mr Johnson said that putting a Corbyn government propped up by the SNP in No10 would see another two referendums, one on Brexit and the other Scottish independence.

In a letter he writes: Nothing could do more damage to our democracy than for Parliament to break the promises made because politicians don’t agree with the voters.

“If you agree with me, then please talk about this choice to your friends and family over the next few days.

Make sure they understand what is at stake. Let’s wake up on Friday 13th and go forwards with a Conservative majority government.

“Let’s not go back into a parliamentary Groundhog Day nightmare with Jeremy Corbyn propped up by Nicola Sturgeon.”

Stamp duty holiday explained: How would it work and how long would it last?

I’m furious I’ve been ordered to remove the flags I’m flying for the Queen...

25 per cent of frontline NHS staff were off last week due to coronavirus,...

Pregnant Stacey Dooley says she has been in tears over pregnancy anxiety and reveals...