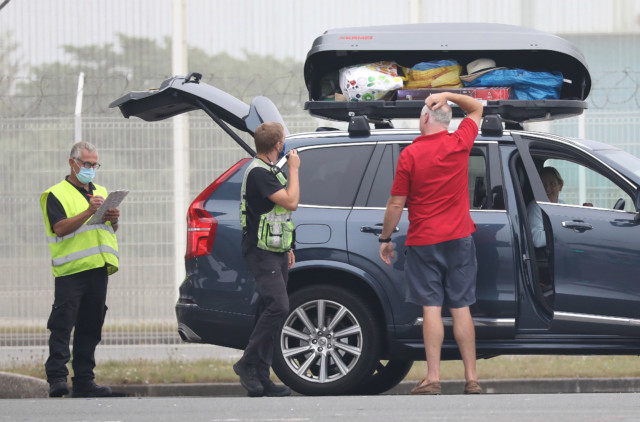 HOLIDAY Drivers could face hefty fines if they don’t lock up their boots before crossing the channel as part of new tough border measures.

The plans are part of Priti Patel’s wide ranging reforms of the border to crack down on illegal immigration and the asylum system.

Drivers could be lumped with a £2000 fine for “failing to secure a vehicle” which could apply to car boots, caravans, vans and lorries.

A consultation into the proposed plans are laid out in the 60 page dossier called a “New Plan for Immigration.”

If agreed ministers would create a new offence in a bid to stop migrants hoping into vehicles while queuing to cross the channel.

It would be handed out “regardless of whether clandestine entrants are found on board or not.”

Although the consolation is aimed primarily at lorry drivers, Home Office officials could not rule out the laws being extended to tourists coming back from the continent.

Sources said they aren’t seeking to target tourists but they didn’t rule it out in the wider consultation.

A Home Office spokesperson added: “The focus of the enforcement of these measures will be hauliers who do not take appropriate measures to prevent illegal entry into the UK.”

Ms Patel outlined her plans to overhaul the current system to MPs today.

Another plan will see refugees who turn to a life of crime having their status revoked and will be booted out of Britain.

The Home Secretary announced plans to revoke asylum status to anyone who breaks the law and ends up with a prison sentence over 12 months – in line with other immigration rules.

Under current laws asylum seekers who commit a crime, have to be jailed for over two years before they can have their status stripped from them. Ms Patel told HOAR that she would take aim at immoral lawyers and lefty armchair critics, the Home Secretary declared “no one can defend the current system” as she launches the biggest reforms in a generation to Britain’s “broken” asylum process.

Priti told HOAR “the status quo is not an option anymore” as she warned her “mission” will take years to complete.

Throwing down the gauntlet to the PM amid suggestions she could be reshuffled out of her job, she says: “I’m here to get on and do this job” but stressed it would be “hard, hard graft.”

“This will take time and I’ll be very honest with the British people about this there’s no one quick fix, this is not a short term, this is for the long term.”

Priti’s landmark reforms will be based on three “firm but fair” pillars:

Speaking from her Whitehall office on Tuesday she warned that the aim of the reforms was to stop young economic male migrants “elbowing their way” to the front of the immigration queue.

Migrants dumped onto British beaches by people smugglers face being immediately deported to facilities outside the EU where they will have their claims processed – dubbed ‘boomeranging’ by Ms Patel’s Home Office team.

And in a bid to crack down on “asylum shoppers” coming from Europe, migrants will only be handed a temporary immigration status, rather than a full right to settle.

They will also face greater hurdles meeting up with family in the UK and accessing benefits and will be house in special “reception centres” rather than hotels and houses. Ms Patel said “the status quo is not an option anymore.” She said: “If, like over 60 per cent of illegal arrivals, they have travelled through a safe country like France to get here, they will not have immediate entry into the asylum system – which is what happens today.”

But Asylum Seekers who used new “safe and legal routes” through aid agencies and charities will be welcomed with “resettlement packages” and given priority.

Priti said: “We will make sure that they are supported with English language, training and education, along with accommodation but also giving them the support that they need within the community to make a success of their new life in the United Kingdom.”

And for law firms who have thrived on hopeless immigration appeals,she said it “is simply not right that they are preventing us from removing murderers and rapists, some of the most awful individuals that have participated in terrible criminality in the United Kingdom.

“So this will lead to a fundamental change.”

And she said their activities are morally wrong, as  “their usual business right now is supporting basically criminality and people smuggling and all the while people are dying. We can simply not carry on with the system as it is.” An immigrant carries a young girl as they are brought to shore in Dover, Kent, by Border Force officers

Firms that use doomed attempts to fight deportations with repeated disingenuous appeals face being put to the wall with crippling costs for wasting court time.

The fixed recoverable costs regime will be expanded to cover immigration and asylum judicial reviews and the scope of Wasted Costs Orders will be widened to include asylum and immigration matters.

The reforms will also target the Modern Slavery Act which is being abused by criminals to avoid being deported.

That will put her at loggerheads with former PM and Home Secretary Theresa May who championed the laws.

But Priti said she “will work with everybody” to make sure the loopholes are closed which are “simply not right.”

She added: “We have to bring in changes to save lives, and bring in safe and legal routes to be not just, compassionate, but do the right thing for those people that are fleeing persecution.”

“I make no apology for these actions being firm, but as they will also save lives and target people smugglers, they are also undeniably fair.”

Coronation Street spoilers: Soap star to return to Cobbles after 22 year hiatus; plus...

Owen Warner’s ‘girlfriend’ reveals why he is so daft on I’m A Celebrity and...

Quiz announces division that runs 82 stores will be put into administration amid coronavirus...