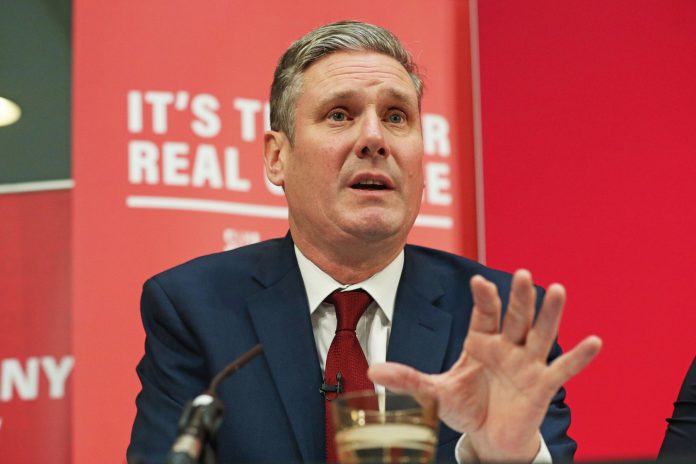 KNIGHTED millionaire barrister Sir Keir Starmer claimed he was working class in a cringeworthy pitch for the Labour leadership.

In a bid to impress the hard left part of the party, the lawyer said he wanted to build on that radicalism of Jeremy Corbyns flop of a manifesto and promoted his working-class roots.

The wealthy lawyer made his claims yesterday as he considered running for the top leftie job, as fellow London Remainer Emily Thornberry also announced she was running.

She claimed she had pummelled the PM Boris Johnson while they at the dispatch box when he was Foreign Secretary.

Ms Thornberry is taking legal action against former Labour MP Caroline Flint over allegations she called northern voters stupid but that hasnt stopped her being the first to officially throw her hat into the leadership ring.

Sir Keir has yet to officially declare but spoke about how Labour needed to progress after the disastrous election defeat but warned Labour must not oversteer away from the left-wing politics of Mr Corbyn.

He dismissed claims that he is too metropolitan and middle class to win back the Red Wall, saying: As you know my dad worked in a factory, he was a toolmaker, and my mum was a nurse and she contracted a very rare disease very early in her life that meant she was constantly in need of NHS care, so actually my background isnt what they think it is.”

I actually had never been in any work-place other than a factory until I left home for university.”

I had never been in an office.”

The idea that somehow I personally dont know what its like for people across the country and in all sorts of different circumstances is just not borne out.

But a former MP Gareth Snell, who was dumped from his Stoke-on-Trent central seat criticised the knight, tweeting: Those of us in leave seats with small majorities in towns and small cities *begged* @Keir_Starmer to listen to us and our constituents when we told him that the partys Brexit policy was losing us votes.”

“He wouldnt listen and we lost.

In her pitch, Ms Thornberry said she had warned the shadow cabinet that an election before Brexit was sorted would be an act of catastrophic political folly.

Speaking about the PM she said: I took the fight to him every day, and pummelled him every week.”

She added: He hated it, especially coming from a woman.

Former Yvette Cooper emerged as another potential candidate for the leader saying she would reflect over Christmas over a potential bid as Wigan MP Lisa Nandy said she may kick off her campaign for leadership in the new year.

Manchester Mayor, Andy Burnham, who is said to be backing Ms Nandy said the party need to revive in the mainstream tradition.

He added: And what I mean by that is a leader in the mould of John Smith, Clement Attlee, people who understood that Labour had to both yes be radical in the change we want to make, but also have a plan that can be acceptable to the majority of British people and we seem to have forgotten that.

Key Corbyn ally Rebecca Long-Bailey is seen as the choice of the current leadership with her flatmate and friend Angela Rayner.

Bungling MP Richard Burgon has also backed Ms Long-Bailey and said he would consider running as her deputy.

Top ten players in the WORLD as rated by FIFA 23

Kate Middleton stuns in £849 tartan coat as she attends NHS film screening with...

The Queen twists her wedding ring to let staff know when shes bored of...