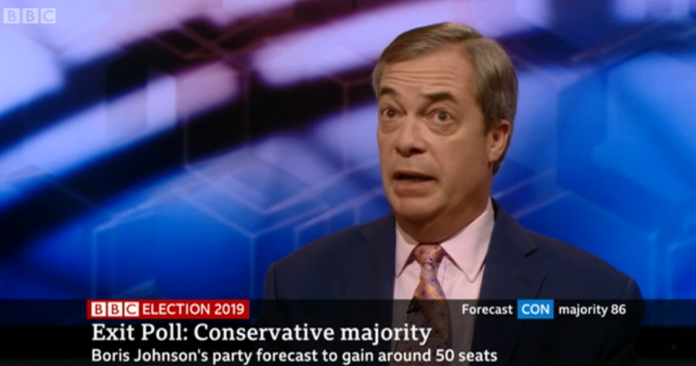 The exit polls predicted they won’t win a single seat in the election, but the party leader insisted he was still pleased.

He told the BBC’s Andrew Neil: “We’ve used our influence that’s the important thing. We are a new party, we’ve got no councillors, no base.

“If we get Brexit, given that it was in the weeds back in February, we set this thing up, we’ve put it back on track, if we get there we’ve done a good job.

“Would I like to have won a few seats then yes of course.

“My purpose was to try and get the right kind of Brexit, if we get half a loaf out of it then that’s what we have achieved.”

He was quizzed on rumours he is heading to the US to be “Donald Trump’s warm up”.

Mr Farage laughed as he said “I’ve got no plans to leave the country”, but admitted “i’f I’m asked to help I may”.

Sterling rose almost two per cent from $1.3162 to just under $1.34 this evening, minutes after the astonishing Opsos Mori survey was published.

Today, Brits headed to the polls to vote in one of the biggest and most decisive elections ever.

Exit polls put Mr Johnson on course for a majority win with 368 while Labour trailed at just 191.

The PM tweeted: “Thank you to everyone across our great country who voted, who volunteered, who stood as candidates. We live in the greatest democracy in the world.”

EastEnders fans furious as Aaron spikes his dad Harvey’s drink on his date with...

When was the Scottish Independence referendum and will there be a second one?