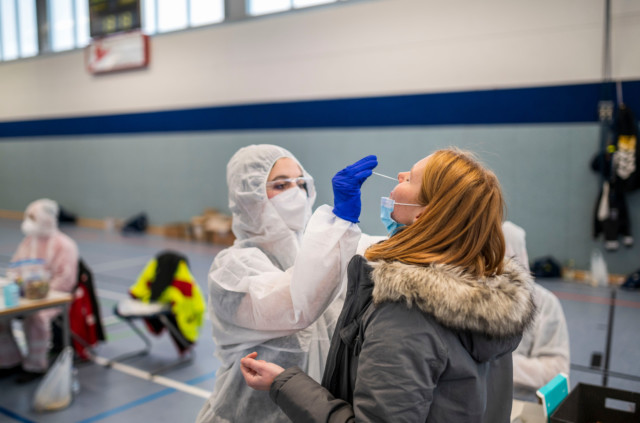 MINISTERS are drawing up plans for a New Year ­testing blitz in schools in a campaign to prevent a third wave of killer Covid.

Hundreds of thousands of swabs are expected to be sent around the country for use in a campaign to pinpoint teenagers unknowingly carrying coronavirus.

It came as Education Secretary Gavin Williamson went to war with councils who told schools to close.

He wrote to Labour-run Greenwich in South East London giving them until 10am today to withdraw their letter telling headteachers to dismiss classes a week early. He threatened to get a High Court injunction to force them to U-turn if they refuse to comply.

Schools have been thrust into the spotlight again after a string of Labour-run councils shut early for Christmas, saying the move was the only way to fend off a third wave.

The revolt was triggered last week by Basildon Council in Essex, with Greenwich and Islington in North London following hot on their heels.

London’s Labour mayor, Sadiq Khan, weighed in by calling for all secondary schools in the capital to be shut for up to a month over the festive period. The move would cause a massive headache for parents. He said: “Some schools are not Covid safe. In some, the spread of the virus is accelerating. For secondary schools and FE colleges there should be mass testing available.

“If they can’t get the testing they need they should ­probably close a few days early to avoid the children catching the virus and passing it on. If we need to open schools a few days late in January that’s the safe, sensible thing to do.”

The revolt has triggered a furious backlash from Downing Street where PM Boris Johnson is determined to keep kids in class as a “national priority”.

His spokesman said: “We have consistently said that not being in school has a detrimental impact on children’s learning and their personal development and mental health.

“That is why we expect all schools and colleges to remain open until the end of term.”

In a blistering statement, Mr Williamson fumed: “It is simply not in children’s best interests for schools in Greenwich, Islington or elsewhere to close their doors.

“Schools and colleges up and down the country in all tiers have shown incredible resilience — and it’s down to the hard work of teachers and staff that millions of children and young people have been able to benefit from a face-to-face education and be with their friends.

“I have always been clear that using legal powers is a last resort but continuity of education is a national priority.

“That’s why I won’t hesitate to do what is right for young people and have issued a direction to Greenwich Council setting out that they must withdraw the letter issued to headteachers on Sunday.”

Scientists have also warned against a mad dash to close down schools which have taken steps to be Covid secure.

They said teens could end up being a bigger danger to the public if they are chucked out of classes and left to their own devices.

Deputy Chief Medical Officer Jenny Harries said shutting schools early “would do more harm than good”. She told MPs in a Zoom briefing that the behaviour of teenagers “can be somewhat controlled” in schools that are Covid secure. Mr Williamson has said: ‘It is simply not in children’s best interests for schools in Greenwich, Islington or elsewhere to close their doors’

She said: “If they’re not in school, they are likely to mix anyway without a responsible adult to intervene”.

Health chiefs are understood to be ramping up testing plans amid growing fears that older children are fuelling the rocketing infection rates across the South East.

London’s coronavirus hot spots have been flooded with extra mobile testing to screen secondary school kids and their families.

No.10 came under fire earlier this year after failing to deliver on a promise to reopen schools for all pupils before summer.

PM Johnson managed to get all children back to class in time for the September term. Since then he has repeatedly promised that schools will be the last part of society to be ordered to shut in a lockdown.

Data shows that Covid infection rates have shot up among older teenagers and young adults.

The latest official statistics for London reveal that 16 to 29-year-old have the highest infection rate of any age group. Love Island fans disgusted as Callum picks his nose with his sock before putting...

Star in your own version of X Factor: Celebrity with great deals on karaoke...

Love Islands Demi says shell be crying in the corner after Nas dumps her...