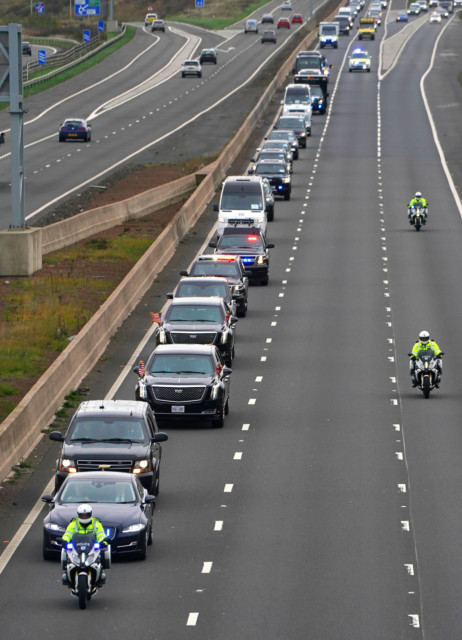 THE QUEEN stole the show via a video message at the COP26 summit in Glasgow.

Begging the question: Why wasn’t the whole event conducted online as a “green” message to the world?

Instead there are more than 400 jets, many of them private, sitting on the tarmac at Glasgow International Airport.

At a conservative estimate, they will pump 13,000 tonnes of CO2 into the air — more global warming gas than around 1,600 Scots would burn through in a year.

One of those jets, a chartered Airbus, transported our own PM Boris Johnson back to London last night because, as No 10 breezily explained, his time is more important than the message it would send.

Oh dear. He’s veering dangerously in to Harry and Meghan “do as we say, not as we do” territory.

And what about the valuable time of the, say, nurse, carer or firefighter who bought a diesel car to get themselves to work in the early hours after Gordon Brown’s 2001 “dash for diesel” budget and now find themselves punished to the tune of £12.50 a day by the Mayor of London’s new ultra low emissions zone (ULEZ).

Those with cash to spare will either have a post-2015 model or will have off-loaded their diesel for an overpriced electric car to escape this latest green tax.

But those of lower income who need their trusty old car/van for their job can’t afford to buy a Tesla so Elon Musk can fire off another rocket.

As ever, while the lives of the virtue-signalling architects of these cash-grabbing policies remain largely unaffected, the heaviest brunt is borne by the ordinary people who can least afford them.

Ordinary people, I might add, who are very much on board with wanting to help the planet, but not if it’s to the detriment of being able to keep their head above water financially.

Meanwhile, continuing her tour of safe countries already implementing green policies, climate change activist Greta Thunberg is shouting the odds in Glasgow too — while China and Russia remain oblivious to her, er, charms.

But you know what? Unlike many of the world lead-ers grandstanding in Glasgow, at least she practises what she preaches.

Boris is veering dangerously in to Harry and Meghan ‘do as we say, not as we do’ territory

So too does Sir David Attenborough, who has more credibility on this matter than all of the COP26 grandees put together.

“This COP26 is so far just like the previous COPs, and that has led us nowhere,” says Greta, 18.

Indeed there are. Politicians who clearly think the green policies they are pushing on the rest of us are for the little people and not for them.

And an airport packed with luxury jets (not to mention Joe Biden’s 22-strong vehicle motorcade) very much suggests the latter.

Is time up for Andy?

THE boss of Barclays has resigned after “misleading” the bank over his links to the late paedophile Jeffrey Epstein.

An investigation into Jes Staley, 64, is understood to conclude that he wrongly “played down” his friendship with Epstein and continued to enjoy his lavish hospitality long after his downfall. Just like Prince Andrew who, after laying low since his disastrous TV interview with Panorama, has now employed attack dog lawyers to go for the jugular of Virginia Giuffre – who has accused him of sexually abusing her when she was 17.

He was seen enjoying the spacious environs of the Windsor estate this week, while his friend Ghislaine Maxwell remains holed up in what her lawyers describe as “horrific” confinement conditions in a New York jail.

She is pleading not guilty to procuring women and underage girls for Epstein, but on Monday she suffered a series of legal setbacks in her ongoing fight against the allegations – and one wonders whether a plea bargain might be in the pipeline.

As Ghislaine is the third person in that photo of Andrew with his arm around then teenager Virginia, she can potentially exonerate or implicate him over what happened next.

True. But it depends on what else the character they are playing has got going on.
Claire’s role as The Queen, a wife and mother who also happens to be our Head of State, would be a layered gem for any thespian.

So too Erin Brockovich, the campaigning lawyer; Hidden Figures, about the real-life team of female African-American mathematicians crucial to NASA’s early space programme; or even fictional roles such as Thelma and Louise, Marge Gunderson in Fargo, or Evelyn Abbott in A Quiet Place.

But when that “wife and mother” is merely bringing in the tea while the men sit around discussing world affairs, or does little more than cavort across the screen in skimpy underwear, then it’s probably best avoided until something more substantial comes along.

SA-Yes, Rudy’s the man for me AS an avid fan of Channel 4’s SAS: Who Dares Wins (I have seen every episode) I feared they might struggle to replace current frontman and tough guy Ant Middleton – dropped after clashing with TV bosses over his “personal conduct”.

But having considered all the attributes of his replacement Rudy Reyes, a highly decorated former US Navy Seal, I’m reconsidering my position.

Yikes. He makes Ant and the rest of the SAS team look like Mr Puniverse entrants.

Keir Starmer vows to ‘sweat blood’ to win back voters – but they don’t...