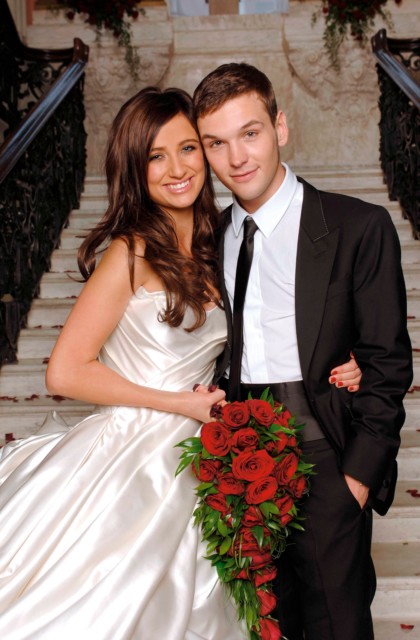 AT THE height of her fame, Chantelle Houghton commanded six-figure sums for magazine interviews and married her pop star hunk in a gown by Princess Diana’s wedding dress designer.

Now working as a manager for The Body Shop and engaged to property developer and alloy wheel repairer Michael Strutt, 35, the mum-of-one’s life seems worlds apart, but she’s never been happier.

Famous for being a normal girl thrust into Celebrity Big Brother aged 22, as part of a fictional girl band called Kandy Floss, Chantelle insists she never let fame go to her head.

The 37-year-old, from Brentwood, Essex, went on to win the January 2006 series of CBB and bagged a boyfriend, Ordinary Boys frontman Samuel Preston, in the process.

The couple were engaged by April, married in August and separated the following June – with Chantelle by then a celeb in her own right.

Speaking to Fabulous, she explains: “I didn’t have any expectations, I genuinely thought I’d go into the Big Brother house and it would be a one-off thing. “I’ve always been really grateful for whatever opportunities come my way. I had the time of my life but I’m very grounded and I think that was important.

“For my very first magazine interview, I was paid £250,000, it was insane. I was very, very grateful but it’s crazy money. For my wedding to Preston, we got nearly £1 million.

“That was never going to last forever and I was mindful of that back then. I didn’t have a talent, I wasn’t a singer or an actor – but I took advantage of every opportunity I had and it changed my life.

“I was a millionaire and I’ve got a mortgage-free home as a result. I was very wise with my money, I didn’t go out and spend it on designer handbags or shoes.

“Luckily I made some good investments that I still have today.” Among Chantelle’s craziest memories are drinking tea with Prince Charles in Clarence House, for the Prince’s Trust charity, and tying the knot in a dress by Elizabeth Emmanuel – who famously designed Diana’s gown with her now ex-husband David.

She says: “I never went on Big Brother to be famous, but I didn’t get a great education and I didn’t have any holidays growing up, we were always very short on money.

“I grew up with bailiffs knocking on the door, and I just didn’t want to live that life.

“My first job when I left school at 15 was in London as an office junior. Everyone would go out wining and dining at lunchtime and I’d be sat on a park bench, eating my vegan salad sandwich.

“I’m not workshy at all. My mum’s partner runs a removal firm and pre-Big Brother, I’d go out with the guys in a lorry for £60-a-day.

“I’ve never admitted that before but I’ve realised there’s no shame in having a real job.” Chantelle met ex-husband Preston, who she’s still friends with, on the reality show

Chantelle, who took a step back from fame after having her daughter eight years ago, joined The Body Shop as an Independent Consultant in September.

She worked her way up to Area Manager within four weeks but don’t expect to see her in your local high street store, as Chantelle sells her products through social media.

The Body Shop at Home is a multi level marketing platform, with home sellers earning up to 30 per cent commission.

MLMs can be controversial because of their buy-in rates (in the Body Shop’s case £49) and for encouraging home sellers to buy stock.

For Chantelle, it’s the perfect job and she admits fame gave her a “headstart”. Chantelle says being a celeb can be ‘demoralising’

She says: “When you’re working in the public eye, there’s no focus. Waiting for the phone to ring is quite demoralising.

“Now I work for three to four hours every day, it gives me some structure in my life instead of doing the school run and then thinking ‘what now?’

“This has given me a purpose of not just being a stay at home mum, cooking and cleaning.

“I just love the normality of it, I’ve got a team of 21 girls underneath me who I didn’t know before but they’re all lovely.

“I think a lot of people assume you’re never lonely if you’re in the public eye, but actually it can be the loneliest place.

“After my daughter was born, I took a step back from the celebrity side of things and people I thought were my best friends disappeared off the face of the Earth.

“They were nowhere to be seen because I wasn’t paying for St Tropez holidays, Mayfair hotels or meals out in Gordon Ramsey’s restaurant anymore.

“That’s why it’s nice working in a normal job, you’re all on the same page, people aren’t being your friend because of what they can get out of it.

“It’s refreshing after being in the public eye from such a young age and putting up with so much trolling and horrible comments.

“I need an income and obviously with Covid it’s more difficult, but I’m not frightened of hard work.

“You can’t win though because if you do a photo shoot with a magazine talking about your life, you get abuse saying ‘oh you’re just a Z-lister, your five minutes of fame are up’.

“Then I go and get a normal job and people say ‘oh she must be skint, she obviously hasn’t got any money’.

“The comments do hurt. It’s not nice and they dig deep sometimes but I try to take it on the chin. You can’t win so I’ve realised you need to do whatever makes you happy.

“My senior regional manager earns a five figure salary every week, she’s been in the business for five years and she just absolutely loves what she does.

“Some women want to earn a couple of hundred quid a month, some of us want to earn £2,000 a month, it’s just about how much you put into it.” Chantelle took a step back from fame after becoming a mum

Although she wants to continue up the ladder at The Body Shop, Chantelle isn’t turning her back on fame just yet.

She says: “I’m always keeping that door open, but it was just a job for me, it wasn’t all consuming.

“I’m definitely not turning my back on it, I’ll make good of every opportunity that sticks right for me, but it’s just good to have a stable job in my life and a focus.”

Chantelle has now had three whirlwind engagements, having said ‘yes’ to Michael after just three months of dating in April.

But the reality star, who had been single since 2014, insists this time is different as she’s known Michael, who lived next door to her mum, for years. Chantelle says she’s more confident than ever in her 30s Chantelle and Michael have known each other for nearly a decade

She says: “It’s going really well. We’re looking for a house at the moment to renovate, somewhere rundown.

“Everyone keeps asking about the wedding but that’s not happening for a good few years.

“Partly because of Covid and there’s other stuff which is important to us before we spend money on a wedding, like a house and Michael continuing on his alloy business which is very new.

“It will probably be a long engagement and I’m absolutely fine with that. My last engagement was very short and it didn’t have the best outcome but it’s all a learning game.

“I love that Michael’s not in the public eye. Because he’s known me for a long time, he’s never seen me like that either. He doesn’t make me feel like he’s with me for anything other than just me.

“We’ve known each other for nearly 10 years and he knows me more than I know myself.

“Don’t get me wrong, every relationship has its issues and we have had rows, but I know I will be with him forever. I’ve never had that contentment before.”

Having embraced ‘normal’ life, Chantelle says: “In myself, I’m definitely the happiest I’ve ever been.

“I’m getting more confident as I’m getting older because there’s so much pressure on young girls to look a certain way, but I’m not a young girl anymore so this is me, like it or lump it.

“I’m three stone overweight at the moment but I’m OK with it.

“I’m not frightened of the way I look anymore, I’m not going to walk around in a bin bag dress just so people don’t think I’m overweight.

“This is me and I’m happy, so I don’t really care what people think. Life’s too short.”

Shoppers rush to buy £1 home essential at B&M that could help slash your...