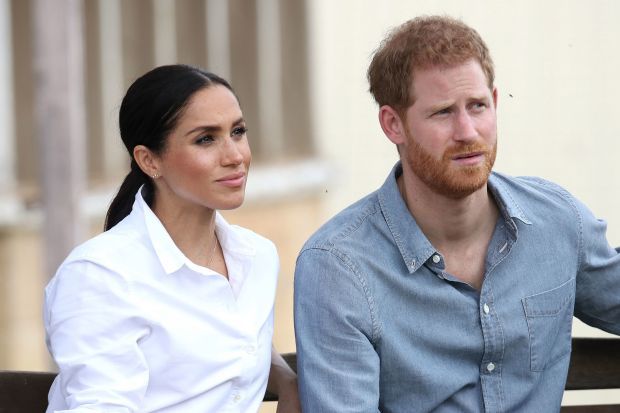 SINCE getting together in 2016 Prince Harry and Meghan Markle’s relationship has been a whirlwind of fancy Windsor weddings and woke lunches.

It makes us tired just thinking about it. Since first being pictured together at the Invictus Games in Canada – Meghan wearing ripped jeans – they’ve moved to Britain, married, had a baby, gone on world tours, formed the ‘fab four’, stopped being working Royals, launched Megxit and now moved back to the States (where they’re working on a £76m Netflix deal).

Now body language expert Judi James, speaking exclusively to Fabulous, tells us exactly what their time together means – and how they STILL have sexual chemistry. The couple pictured together at their first public outing in Canada

Harry’s soppy smiles (even when he was looking away from Meghan here) and his leg splay and his bicep display meant that attempt at a casual pose wasn’t fooling anyone.

Meghan’s pose, with her legs crossed towards Harry and her hand raised in a partial cut-off barrier from the outside world showed sexual electricity and reciprocated affection.

Her attention on the day was very firmly on her Prince to flatter him, although the ripped jeans and boyfriend shirt were more Hollywood than Windsor. Posing for the cameras as they announce their engagement

At first glance the couple appear as mirrored as bookends, suggesting equal status and like-minded thinking.

The finer details of their body language shows Meghan was adopting a shy, rather coyly submissive pose here though, pressing her torso into Harry’s and wearing the wide, delighted smile of a new royal bride.

Harry looks besotted but also tense here, as though he is wary of gifting his bride-to-be to the press. Talking to the crowds in Nottingham

This was the first glimpse of the couple’s hugely tactile displays and the look of love on both Harry and Meghan’s faces was contagious as they had the whole nation grinning soppily at the new romance. On their wedding day in Windsor

This was probably the best even-status body language moment for the couple, with Meghan’s levels of confidence on a high after her solo walk down the aisle and after hearing the mass support of the crowds outside.

Meghan became a UK star in her own right here and her dazzling smile and royal wave suggested she was loving it.

She and Harry use more authentic mirroring here as they form a team and a very status-balanced, popular royal double act. In Australia, where Meghan announced her pregnancy

The Australian tour (and Meghan confirms her pregnancy)

Meghan’s chin is held down here to suggest shyness but that big folder supplied the clue that she was pregnant.

This pose encapsulates the theme of their body language during the entire tour, with Harry trying to act the protective alpha male whilst grinning like a Cheshire cat, and Meghan showing increasing levels of confidence, with some semi-maternal gestures aimed at reassuring her over-excited husband. Showing off Archie to the world for the first time

This pose suggested the couple (or Meghan) would be turning royal tradition on its head.

Instead of the mother cradling the baby while the husband stands looking puffed with pride it was Meghan ushering her beloved ‘two boys’ to the waiting press.

Her hand is on Harry’s back and it was Harry doing the baby stuff, showing his role was emphatically that of a hands-on dad. The christening of Archie

Having formed their own little power-base with their own, less traditional body language rituals in public, Harry and Meghan look happy but also uncomfortable here, surrounded by signs of tension from some of the other members of the family.

Harry’s leg splay shows his pride and Meghan’s smile shows her delight at baby Archie though. Archie stole the show on their South Africa tour

With her more campaigning side showing now she was no longer under the watchful eye of the Firm, Meghan began to show more dominance and appear again as an eloquent world-changer in her own right.

Harry looked over-awed by his wife and his new baby son, gazing dotingly at both Meghan and Archie or even happy to appear waiting out of shot holding Archie while Meghan took her place in the spotlight. One of their final engagements in the UK

That sense of tension grew to boiling point here as Harry & Meghan appear for their last UK gig, walking behind the very grim-faced Cambridge’s. Meghan’s styling and her demeanour was totally changed here and we saw the stand-alone, confident woman rather than the trainee royal bride.

Her signals of support for Harry were constant but he looked lost in his own bubble of misery here, chewing and sucking in his lips and with his by-then-familiar haunted eye expression. The couple are now settled in the UK

The couple’s first picture in LA

The couple were quick to announce a new life, a new start and even a new relationship. Here in LA it was Meghan showing Harry the ropes rather than the other way round and the seismic shift seemed to suit him as he is now more the casual and relaxed Harry from before the royal split.

Meghan looks at him as though he is still wearing his US L-plates here, with her devoted eye-gaze showing she’s happy and excited to present him with all the possibilities of being a new global power-couple. This week the couple released this portrait

With her acting experience and her eloquence, passion and empathy for her causes, Meghan is undoubtedly the star of the double act now they are off making the world a better place, but this pose very cleverly places Harry in the higher and more dominant position, looking direct into the camera while Meghan giggles shyly from the chair.

Meghan & Harry here though is the subtle sexual signal, with her arm on his thigh, suggesting they are still as besotted and tactile as when their relationship first began.

In more Royals news, Meghan wore an astonishing £300k worth of gems in an interview to promote a ‘better digital world’.

We previously shared how Meghan Markle and Prince Harry will skip Christmas with ‘disappointed’ Queen & will celebrate in $15m pad, it’s claimed.

Meanwhile, Meghan Markle may rein in ‘woke’ speeches after seeing Prince Harry’s relationship with family is at risk, expert says.

In other royal news, we told you how Meghan wants to “make the world a better place” for Archie.

Molly-Mae’s Hague shows off mega-money bathroom with £2,500 worth of designer washbags

Prince Harry ‘feared Meghan Markle would dump him if he didn’t slam media over...

Prince Charles and Camilla stand in for the Queen at Royal Maundy Service –...

Strictly’s Dan Walker says show is a ‘popularity contest’ not a dance competition as...