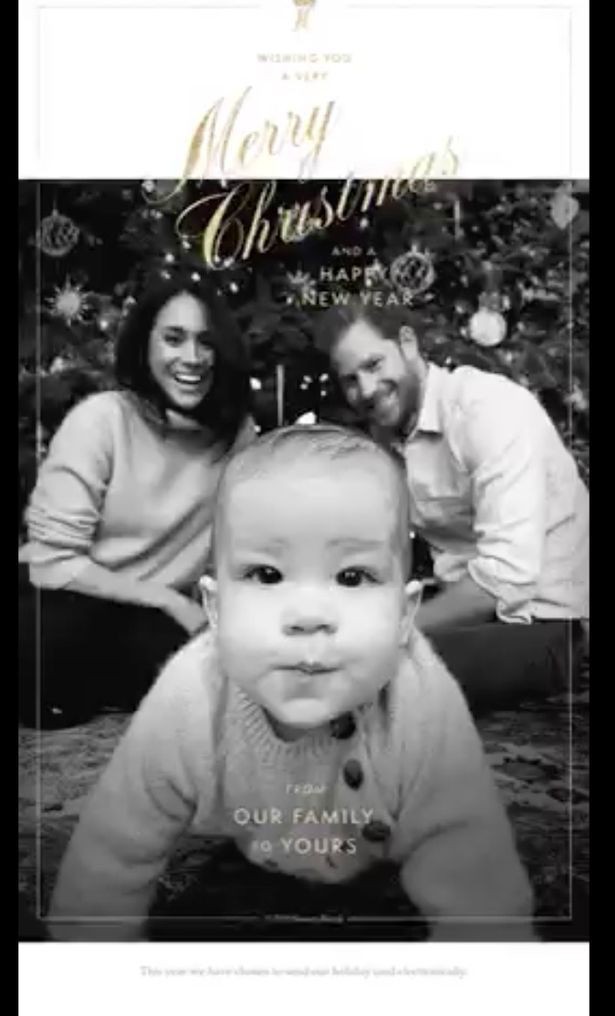 The “sweetest” photo shows the Duke and Duchess of Sussex in fits of laughter behind their cute son.

The royals are pictured on the floor in front of a Christmas tree decorated with lights and baubles.

The card reads: “Merry Christmas and a happy new year from our family to yours.”

And the bottom of the card it adds: “this year we have chosen to send our holiday card electronically”.

The card was released on Twitter days after it emerged Harry and Meghan have taken baby Archie to Canada to spend the Christmas break.

The Duke and Duchess of Sussex took their seven month old boy with them for an extended holiday break after telling how they were struggling to deal with life in the public eye.

They decided to snub the Queens invitation to Sandringham in favour of staying abroad.

It’s thought the royal couple are deliberately avoiding the US and trying to stay away from press.

According to the Daily Mail, one friend said: “They have barely set foot outside the door and have been enjoying some quality family time together.”

It’s reported that Meghan’s mum, Doria has also been visiting them from LA.

Meghan lived in Toronto for seven years while filming Suits, and some of her best friends still live in the country.

Prince Harry recently recorded a video of himself dressed as a jolly Santa for the Scotty’s Little Soldiers Christmas party, a charity that helps bereaved army children.

Hope you are having an amazing time. I hear there is a 190 of you there this year so please cause as much chaos as humanly possible.”

A spokesperson for Harry and Meghan said they will be spending private family time in Canada.

The palace aide said: The decision to base themselves in Canada reflects the importance of this Commonwealth country to them both.

“The Duke of Sussex has been a frequent visitor to Canada over many years, and it was also home to The Duchess for seven years before she became a member of the Royal Family.

“They are enjoying sharing the warmth of the Canadian people and the beauty of the landscape with their young son.

Harry, Meghan and Archie will spend Christmas away from the rest of the royals this year

The pair are allegedly ‘exhausted’ by 2019

EastEnders hinted at huge Rocky and Dotty’s huge twist in their first episode 8...

Boris Johnson admits he might have to shut the pubs early – but he...