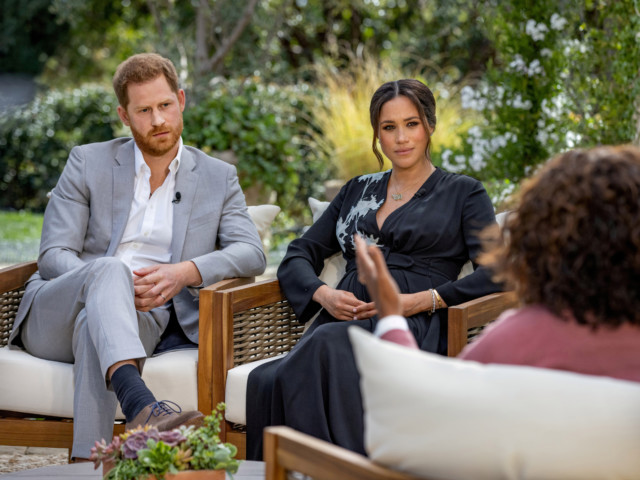 MEGHAN Markle’s biographer claims the Palace is “ignoring” her allegations of racism in the hope they’ll “go away”.

An updated chapter of Finding Freedom quotes a source who says royal aides are hoping the scandal quietly blows over.

A royal source claims the Palace is ‘ignoring’ Meghan’s allegation of racism in the hope it goes away, Finding Freedom reports

It’s just the latest bombshell claim to appear in the book, penned by Omid Scobie – the Sussexes’ preferred journalist – and Carolyn Durand.

Meghan and Harry have denied speaking to the authors themselves – although a note buried at the back of the book reveals the writers chatted to the couple “when appropriate”.

In the latest revelations released ahead of the updated book’s release, it’s claimed the monarchy hope not to have to address allegations made during the Oprah interview.

A royal source told the authors: “There is a feeling that if it’s ignored it will go away but surely by now they should have learned that that never happens?”

And the source said they were “horrified” by the racism allegation, Newsweek reports.

Scobie and Durand write: “The Queen’s ‘recollections may vary’ comment ‘did not go unnoticed’ by the couple, who a close source said were ‘not surprised’ that full ownership was not taken.”

They quote a friend of Meghan saying: “Months later and little accountability has been taken.

“How can you move forward without that?”

Claims a senior royal racist had asked about the colour of Archie’s skin before the tot’s birth were the most damaging made during the Oprah chat.

Meghan and Harry had considered identifying the person responsible, before finally opting against it, it’s reported.

However, the Duchess also alleged that Archie wasn’t made a prince after “concerns and conversations” were raised about his complexion.

When asked to name the person responsible for the comments, she refused – as it would be too “damaging”.

Oprah later confirmed it was neither the Queen nor Prince Philip.

Despite the reaction to the interview, Meghan found it “cathartic” and “liberating”.

On the other side of the pond, the chat left Prince William “furious that private family matters were being discussed in the public domain”, it’s said.

At the time of the allegations, the prince hit back and insisted the Royal Family was “very much not racist”.

A source close to the Sussexes told the authors “emotions are still raw and it is still difficult”.

“It will take time to get past the hurt,” they said.

“There has to be some acknowledgment of understanding about what the Sussexes went through in order for there to be progress.”

Elsewhere in the chapter, it’s claimed the Royal Family were “quietly pleased” that Meghan couldn’t make it to Prince Philip’s funeral.

Revelations in the chapter include:

The Duchess was unable to attend the service at Windsor Castle in April as she was pregnant with daughter Lilibet Diana at the time.

The book claims some royals were happy as they “didn’t want a circus” and feared she would “create a spectacle”.

Harry flew back alone for the service at Windsor.

And Meghan fears the Palace were “trying to discredit her” when allegations she bullied staff emerged.

She was accused of “humiliating” personal assistants and staff, as well as driving two out of the Palace – claims she fiercely denies.

A source close to the couple said: “Though the Duchess was used to defamatory reports, this front-page story was more worrying.

“It felt like certain individuals at the Palace were doing their very best to undermine and discredit anything they worried the couple may or may not say during the interview.” Corrie spoilers: Gail Platt reignites her feud with Eileen by hitting on George after...

EU admits it was wrong to claim UK is blocking Covid vaccine exports –...