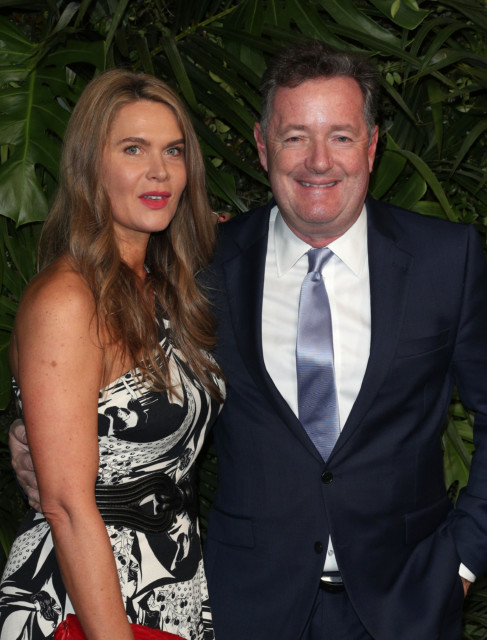 PIERS Morgan’s wife Celia Walden has revealed her unflattering nickname for Meghan Markle as she slammed claims that her husband’s feud is down to “unrequited love”.

It appears that the Duchess of Sussex, 39, has no fans at all in the Morgan household, with journalist Celia leaping to Piers‘ defence after his dramatic week.

The 55-year-old presenter received over 41,000 Ofcom complaints in just one day and was slammed by a leading mental health charity following comments he made about Meghan and Prince Harry’s bombshell Oprah interview.

He then sensationally stormed off Good Morning Britain when confronted over the remarks by his co-star Alex Beresford, quitting the show entirely later that day.

And now Celia has spoken out, writing in her Telegraph column: “Apparently Piers’ stance can be boiled down to his ‘unrequited love’ for Me-gain, ever since she contacted him in 2016 and, clearly thinking he could be of use to her, asked him out for a drink before ghosting him when she moved on to bigger and better things.”

Piers and Meghan famously went for a drink in June 2016, around the time that she started dating Prince Harry, but he claims he never heard from her again.

She revealed her unflattering nickname for Meghan During his live confrontation, GMB’s Alex claimed that Piers only criticised Meghan because of a personal grudge.

He said at the time: “I understand that you don’t like Meghan Markle, you’ve made it so clear a number of times on this programme.

“I understand you’ve got a personal relationship with Meghan Markle, or had one and she cut you off… She’s entitled to cut you off if she wants to.

“Has she said anything about you since she cut you off? I don’t think she has, but yet you continue to trash her.” Alex Beresford confronted him on his ‘personal’ issue with Meghan Footage of Piers sharing his hope of receiving an invitation to Meghan and Harry’s royal wedding recently resurfaced online too – with fans claiming he turned against her when the invite never arrived.

Celia has now insisted that she was invited by Piers to join him and Meghan for the drink at their local – but she chose to stay at home and watch Game of Thrones at the time instead.

And earlier this week the writer joked about her husband no longer having a day job, setting him the task of cleaning their London home as she headed off to work.

Celia made sure that Piers didn’t waste his newly-found free time lounging around, warning him to get the work done before she returns. Piers and Celia married in 2010 She set him to work cleaning their London home on Monday

Taking to her Instagram page this morning, the writer shared a snap of the presenter clutching onto a hoover in their lounge.

Piers’ face is slightly blurry from the action shot, with Celia quipping in the caption: “I want it all done by the time I get back from work. Also, you missed a bit.”

The couple married in 2010 and share nine-year-old daughter Elise.

Piers is also dad to 27-year-old Spencer, 23-year-old Stanley, and 20-year-old Albert from his previous marriage to Marion Shalloe.

Molly-Mae Hague reveals she’s ‘so emotional’ as she gives fans first look at her...