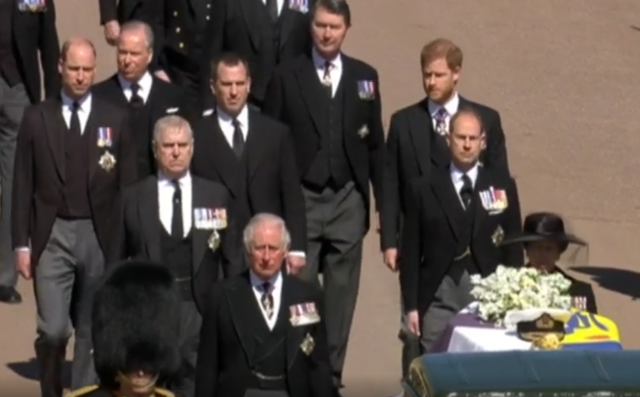 PRINCE Philip’s death nearly a year ago was marked by a pared-down funeral service with only 30 family members and close friends in attendance.

Now the royal family and 1,800 guests will gather to pay tribute – on a grander scale – to the life and legacy of the man who stood by Her Majesty for more than 70 years.

The procession for Philip’s funeral in April 2021

The late Duke of Edinburgh‘s family and guests will gather at Westminster Abbey on March 29, 2020, for a memorial service honouring him.

His funeral service in April 2021 was scaled down in the shadow of Covid-19 restrictions.

Her Majesty the Queen had to sit alone at her husband’s funeral due to concerns over the virus.

This year, the Queen is expected to attend once again, but Covid restrictions will be dramatically lessened.

Today’s Service of Thanksgiving will include the politicians and European royals who could not attend last year.

It is expected to have a heavy military influence, similar to his funeral.

Who is attending the Prince Philip memorial service?

At last year’s funeral, only 30 family members and close friends of the Duke of Edinburgh were able to attend.

Those who attended the Duke’s funeral will also come to the Thanksgiving Service – aside from Prince Harry.

They are all expected to attend today’s service – with the exception of Prince Harry, Duke of Sussex, who is not entering the country due to security concerns.

This Service of Thanksgiving will give 1,800 more mourners the opportunity to bid the late Prince Philip farewell.

Included among the guests are European royals and patrons of the Duke’s favourite charities, including Sir David Attenborough.

A few of the guests in attendance will be: Some of the late Duke’s great-grandchildren might also attend – including Prince George, 8 – but this has not been confirmed.

Boris will leave ‘no stone unturned’ on Brexit D-Day but EU MUST drop threats...