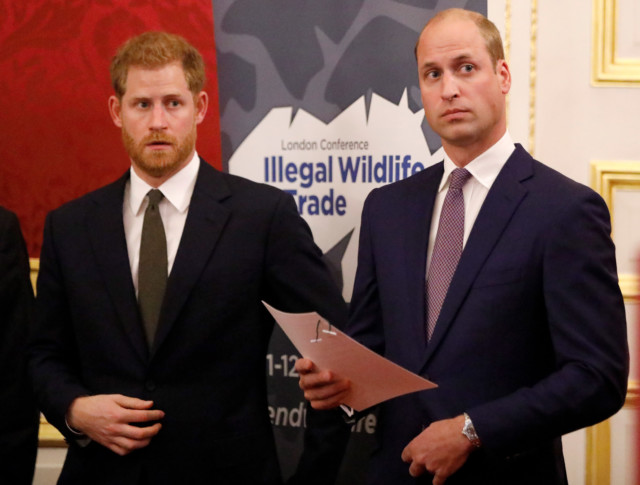 Princes William and Harry have split cash from their mother’s memorial fund between their chosen charities as the pair finalise plans for their new separate working lives.

According to financial documents, an agreement was signed in December last year between the Royal Foundation of the Duke and Duchess of Cambridge and the now-abandoned Sussex Royal Foundation.

Princes William and Harry have now split cahs from their mother’s memorial friend as they take separate paths in their working lives. Royal insiders have rumoured of tensions between the couples after the Duke and Duchess of Sussex announced they would be giving up royal duties.

In April 2013, the Royal Foundation charity assumed legal control of The Diana, Princess of Wales Memorial Fund to safeguard any future income upon the ending of its operations.

It was agreed just under a month before the Duke and Duchess of Sussex announced they intended to step back as senior members of the royal family and become financially independent.

The fund is no longer actively fundraising, but it is understood to occasionally receive some legacies and donations, with the bulk of its money originally going to charities chosen by William and Harry.

The Royal Foundation had operated under the names of the Sussexes and Cambridges, but in June last year Harry and Meghan revealed they were to formally split from their joint charity.

“In March 2020 The Duke and Duchess of Sussex announced that they would no longer be operating Sussex Royal as their primary philanthropic vehicle in the UK and accordingly their share of the net income will instead be donated to another charity of The Duke of Sussex’s choosing.”

It is understood Harry has asked for his share of the funds to go to Sentebale, a charity he founded to help the victims of extreme poverty and HIV/Aids in Lesotho, Botswana and Malawi.

The Royal Foundation annual report revealed that an unrestricted grant of £145,000 was awarded to Sussex Royal to facilitate its set-up.

Meanwhile, a restricted grant of £100,000 was also awarded to Sussex Royal for the development of Harry’s sustainable tourism programme Travalyst.

As part of their decision to “leave the charity”, The Royal Foundation said it had also agreed to provide “a home for legacy projects set up by the Duke and Duchess of Sussex”.

This includes the Empowering Communities and Full Effect programmes, which combat youth violence in London and Nottingham and provide grant funding to a community kitchen in West London.

The Endeavour Fund was transferred to the Invictus Games Foundation, while the Coach Core programme has become a new charity.

Earlier this month, it was reported that the Duke and Duchess of Sussex were formally winding up their UK foundation as they press ahead with their global charitable body named after their son Archie.

The couple, who are now living in Los Angeles after quitting as senior working royals in March, have been establishing the new charitable organisation, Archewell, over the past months.

However, just last month a trademark application for the charity was rejected because it was ‘too vague’ and didn’t ‘cover all the fees required’.

The pair were said to have halted the launch of the charity, named after son Archie, due to thier LA move during the coronavirus pandemic.

Harry and Meghan’s charities were also handed a £860,000 payout from the Royal Foundation, a move that sources says finalised the foursomes split.

In 2018, the Sun told how  “simmering tension” began when William questioned the speed of Harry and Meghan’s engagement.

Then in June 2019 Harry and Meghan officially split off from the charity they shared with William and Kate.

Prince William and Prince Harry first established the Royal Foundation in 2009 before Kate joined two years later shortly after their engagement was announced.

The trio would often appear together at events and the Foundation had huge successes with projects like the Invictus Games for injured veterans and the mental health Heads Together campaign. Charities of Harry and Meghan have been handed £860,000 from a cause they ran with William and Kate