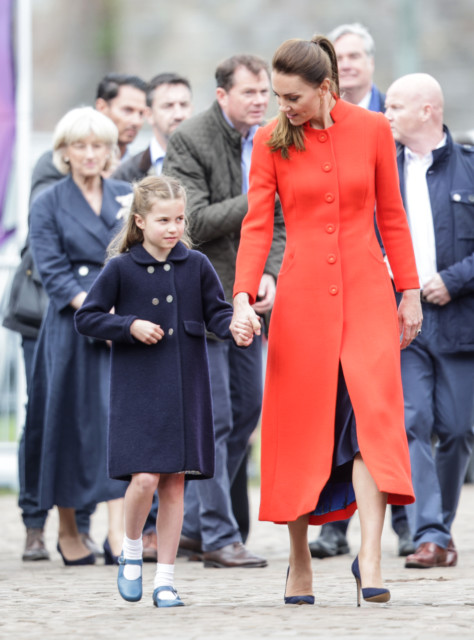 KATE Middleton and Prince William helped “shy” Princess Charlotte and Prince George during their royal visit today, according to a body language expert.

The Cambridges, including Charlotte, seven, and George, eight, travelled to Wales to meet entertainers staging a show at Cardiff Castle to mark the Queen’s Platinum Jubilee.

Kate Middleton was an ‘anchor of confidence’ for Princess Charlotte during today’s Cardiff Castle visit, according to a body language expertJudi James said Charlotte ‘can show signs of growing independence but she can also appear to be quite understandably shy’

The royal youngsters delighted crowds at Trooping the Colour on Thursday as they waved from their carriage and the balcony.

According to Judi James, they appeared slightly more reserved on today’s appearance.

She told Fabulous: “Charlotte can show signs of growing independence but she can also appear to be quite understandably shy during some of these recent public appearances.

“On the one hand we have the little girl happy to root in her grandmother Camilla’s handbag during their carriage ride and to refuse the hand that dad William offers for a reassuring clasp. “On the other hand, we can see a girl who will need some gentle nudging from mum Kate to move forward and join in the royal meet and greets.

“Kate supplies what looks like exactly the right amount of body language cues of reassurance and approval to draw out her daughter’s more confident and playful side.

“She supplies anchoring touches at times, holding her hand when needed, but then there are those small nudges forward and reminders to smile that suggest she’s been doing some coaching behind the scenes.

“William might be George’s supplier of protective hugs and shoulder clamps but it looks very much as though it is Kate who is the anchor of confidence for Charlotte.”

Charlotte and George were certainly a hit on today’s visit, and an adorable clip showed seven-year-old Charlotte folding her hands in the exact same way as her elegant mother.

The sweet moment was noticed by eagle-eyed royal fans, who were quick to comment on social media.

One said: “Oh so cute. She truly looks up to her mother.”

Another added: “Princess in training.”

And a third commented: “This is beyond cute.”

As she stepped out of the car, royal watchers were also convinced they spotted Charlotte attempting a curtsey in front of a navy cadet before he shook her hand.

Taking to Twitter, royal reporter Rebecca English wrote: “I think #PrincessCharlotte went to do a little curtsey, bless her! #PlatinumJubilee.”

And others were quick to agree, with another tweeting: “Yes, that’s what I thought too! What a darling!”

she is still figuring it all out,” added a third.

Another wrote: “She won’t have done much hand shaking and will mainly have seen it when people shake her parents hand while curtsying (if female) so automatically went to do it when he shook hands and just managed to stop herself.”

Prince Louis – who stole the show when he appeared on Buckingham Palace’s balcony with his family and the Queen after the Trooping the Colour ceremony on Thursday – was missing on the visit.

The adorable royal was seen jumping with glee after he was wowed by the Red Arrows.

Louis, four, grinned and chatted to his great-grandmother the Queen as they watched the sensational show from the balcony.

Just hours before, Charlotte was snapped playfully calming her little brother as he enthusiastically waved to enormous crowds watching Trooping the Colour.

The royal youngster placed her hand over her younger brother while in the carriage procession. Charlotte, 7, giggles as she conducts band on her first Royal visit Meanwhile, Kate and Wills yesterday joined other members of the Firm at St Paul’s Cathedral for a special service of thanksgiving.

While the Queen, 96, herself did not attend due to mobility issues, Charles and Camilla, Beatrice and Eugenie and Zara and Mike Tindall were out in force.

Harry and Meghan were seated in the second row on the right hand side, away from the Cambridges who were sat at the front on the left. The Cambridges, including Charlotte, seven, and George, eight, travelled to Wales to meet entertainers staging a show at Cardiff Castle Charlotte, George and Louis joined the Queen on the balcony for Trooping the Colour

White House accuses Boris Johnson of dragging his feet over US trade deal ahead...

Madeleine McCann’s parents cleared with ‘no indication’ they were involved in toddler’s disappearance, say...

Migrants could be registered in Calais to stop them making perilous journey across the...