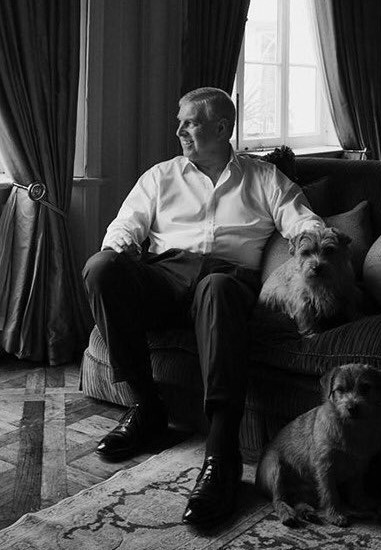 SARAH Ferguson has shared an unseen snap of her ex-husband Prince Andrew to mark his 60th birthday.

Taking to Twitter, the Duchess of York posted a photo of the Queens son sitting in what is thought to be his home of the Royal Lodge in Windsor.

The black and white snap sees the Duke of York gazing out at the grounds of the lodge while sitting with two of his Norfolk Terriers.

While some royal fans were quick to send their own birthday wishes, many responded slamming the tweet describing it as poor taste in light of the Epstein scandal.

The Royal Family also sent their birthday wishes to Andrew today, despite him stepping back from royal duties.

In the post, The Royal Family wrote: “On this day in 1960, Prince Andrew was born at Buckingham Palace, the first child born to a reigning monarch for 103 years.

“Happy Birthday to The Duke of York.”

The Duke of York’smilestone birthday comes amid a turbulent few weeks for the royals, including two divorces and revelationsPrince Harry and Meghan Markle would have to give up using the Sussex Royal brand.

On this day in 1960, Prince Andrew was born at Buckingham Palace, the first child born to a reigning monarch for 103 years. Happy Birthday to The Duke of York. Photographs: Press Association and copyright reserved.

And Prince Andrew himself was sacked from royal duties after increased scrutiny over his relationship with paedo Jeffrey Epstein.

TheDaily Mailclaimed his fall from grace had seen a sharp declinein those willing to celebrate his 60th birthday tonight.

It was reported a number of guests have said they were “unavailable” for tonight’s festivities.

And this has reportedly led to his ex-wife Sarah Ferguson’s assistant Jane Clarke having to send out more invitations to fill seats.

The cocktail dress celebrations will be held at the Royal Lodge on Wednesday night.

And The Queen is a “chocoholic” who always says yes to puddings and keeps her menus in a leather-bound book, her former chef has claimed.

Plus Meghan Markle shared the behind-the-scenes footage of her editing Vogue that the Palace tried to ban for being “too casual”.

Eco-warrior demands for Britain to go carbon-neutral by 2025 would cost at least 200bn...

Getting a PS5 at Best Buy this holiday just got easier – but it’ll...

Is Faye Windass going to expose Geoff in Coronation Street? The teen witnessed his...