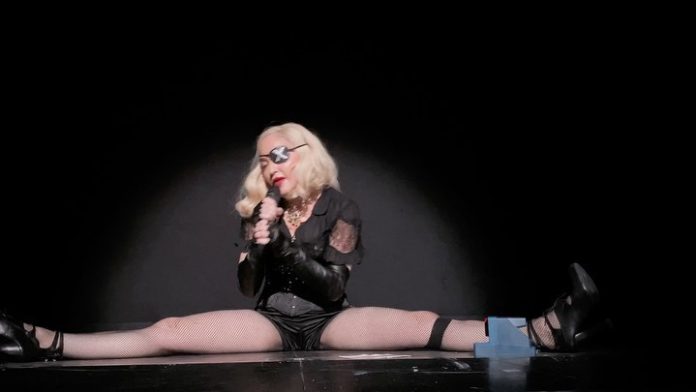 EVEN into her seventh decade, Madonna is as flexible as ever.

Recent snaps of the Queen of Pop prove she is still able to do the splits at 61.

Although injury meant shes had to cancel some Madame X tour gigs in London this week, her love of yoga, dancing and keeping fit means Madge is already back on fighting form…and ready to perform for her army of passionate fans.

Here, we speak to five more women who know how to strike a pose like Madonna and who are set on staying bendy well into later life.

Dina, 60: Compared to others my age, Im strong

NO wonder Dina Cohen is bendy she runs her own yoga business. Dina, who lives in Archway, North London, with her finance director husband Marv Brookes, 55, says:

I was flexible as a child. Id have handstand competitions in the playground with friends.

But in my twenties, I worked in the music industry and was a bit of a raver, prioritising fun over health and fitness.

I discovered yoga in my thirties. I attended a weekly class and found it calming.

I developed strength and learned what my body could do. Being flexible makes life easier, like the time I climbed out of a tiny bus window in Costa Rica to get to the toilet quickly when the packed coach had stopped moving! Compared to others my age, Im strong. On a warm day I can do the splits. I have long hamstrings and can put my leg up by my ear.

Ageing is about losing things. I dont want to get stiff and weak, so Ill keep practising. I want to challenge myself. But some people are just born super-elastic.

COPYWRITER Michelle Waktare, from Fareham, Hants, keeps fit and flexible by cycling. The mum of four is taking part in the British Heart Foundations London-to-Brighton charity bike ride. She says:

Its a bit of a family joke that I once did a floor routine to Madonnas Dress You Up instead of instrumental music. From the age of eight I was into gymnastics and could do the splits. Madonna is a real icon a woman who works hard and does what she wants. I love how she can still do the splits at 61.

I cant do it any more but Im still very flexible. The yoga class in our village attracts a huge range of people.

Some started in their seventies and couldnt touch their toes. Its incredible how much theyve improved.

I have a hereditary back problem and I worry that if I dont look after my body I could be immobile when Im older. If you dont stretch, run or cycle and make it do things it doesnt want to do, its scary how quickly you lose strength.

Natalie, 54: Want to be this flexible for a long time yet

Most people roll out of bed, drive to work, sit at a desk all day then sit on the sofa at home. But its so important to keep moving when you get older. There are plenty of things we can do to stop us going to the doctor for a pill. One is to keep stretching.

All through my teenage years and early twenties, my weight was an issue. I hated dieting and if I wanted a piece of cake, Id eat it.

At my biggest I was 12st. Eventually, with exercise and healthy eating, I dropped to eight and a half stone. I lost weight without trying and became stronger.

Now I practise yoga with my son at home. Quite a few of his friends come to my classes. They may not be able to stretch quite as far as me or be able to touch their toes but yoga isnt competitive.

There are 90-year-olds who can do the splits and teenagers that will never be able to do it. Age is just a number.

I want to be this flexible for a long time yet. Look at Madonna. She is amazing because she has never stopped.

Louise, 57: You need to keep bending as you age

PROJECT manager Louise Edwards wasnt a sporty child but is known to do standing splits at parties. Mum to sons Sam, 31, and Joe, 30, she runs Yin and Hatha yoga classes in Horsham, West Sussex. Louise says:

If you dont oil a bicycle, itll break. Its the same with your body. You need to keep bending and stretching as you age or your flexibility and strength will fade. Madonna has kept at it and is a fantastic role model.

In 1992, I qualified as an aerobics instructor. Ive run bootcamps, taught spin classes and run in seven marathons. I still run with my dog five miles a day. Four years ago, I decided to become a yoga teacher. These days everyone is stressed and yoga is one hour to quieten down. Some people are so flexible they could join the circus but no amount of stretching will help others. Its about finding the right class. Ive got a few party tricks. After a glass of wine, I can be persuaded to put my leg up by my ear.

I can balance on one leg and stand on my head but everybody is different.

Mina, 81: People are surprised how flexible I am

GRAN Mina Semyon runs about with her three-year-old grandson on her back, can touch her toes and until recently could do the splits. Mina, who runs yoga classes in Swiss Cottage, North London, has a daughter Kira, 50, and another grandson, 18. She says:

Im not your average 80-year-old. Most people my age are stiff and cant squat or even bend down to pick something up.

But I can reach down and touch my toes.

I can bend sideways, backwards and forwards and Im more flexible than most young people I meet.

People are a bit surprised by how flexible I am but I practise every day.

I had a very hard childhood growing up in Russia during World War Two.

We were starved and there was a constant level of fear. But when I discovered yoga in the Seventies, it helped me free my mind and body and find inner strength.

Its strange when people talk to me about age because I feel ageless. I am not old and decrepit.

Being flexible helps me enormously as a grandma.

I can get down on the floor and act like a child, and can pick up my grandson and put him on my back. I can be playful.

Rose Ayling-Ellis breaks down in tears as she reveals the Royal family voted for...

How is Simon Cowell doing after his bike accident?