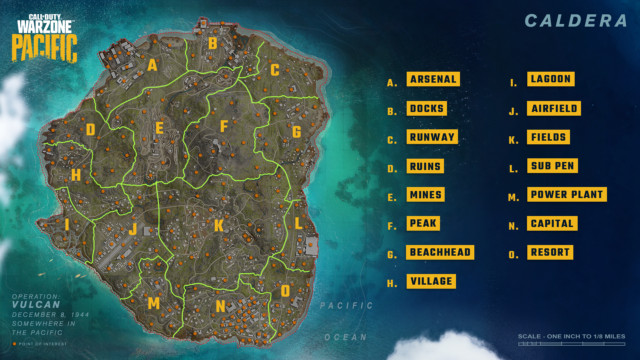 WARZONE Pacific is kicking off next week and we’ve gathered up every screenshot of the map released so far.

The Call of Duty battle royale mode is getting a new map and the Pacific moniker as part of its Vanguard integration.

The Caldera first look gave us an in-depth breakdown of the Pacific map including all 15 drop zones (DZ).

In short, the map is split into 15 areas and is roughly the same size as Verdansk:

Verdansk is getting the plug pulled on it this week in preparation for the changeover.

The Last Hours of Verdansk two-part event will usher it out ahead of the new Caldera map.

You can check out the screenshots of all 15 DZs, as well as the rest of the Warzone Pacific map pics that have been revealed so far, below. DZ C: Runway in the north-eastern corner of the island near the Docks and Beachhead DZ D: Ruins are to the north of the river village and mines with larger ruins to the east DZ E: Phosphate Mines are home to a secret waiting to be unearthed by players DZ F: Peak has the prospect of becoming a hot drop but is pretty exposed DZ G: Beachhead is on the island’s northwest coast with trenches cut into the dunes DZ I: Clear Water Lagoon is full of secrets to uncover including the remains of Captain Butcher’s plane DZ J: Caldera Terminal is full of buildings and aircraft to explore DZ K: The Agricultural Center’s fields are the largest POI on Caldera DZ M: Caldera Power Plant towers above the upper flood plain to the south of the Airfield DZ N: Caldera Capital City lines the southern shore of the island and is filled with historic bulidings One of the new vehicles tucked away on Caldera Caldera’s Peak is set to be a hot drop zone River Village is full of bamboo houses to act as cover Vanguard Royale is brining aerial battles with it Biplanes will debut alongside new weaponry and AA trucks Vanguard modes have dedicated vehicles to navigate across the island

What time is the Call of Duty Warzone Pacific map out?

Minecraft 1.18 update rolls out dramatic new changes to the game as you know it.

Gala Games vs The Sandbox vs Decentraland: Which is the top metaverse game.

Meghan Markle and Prince Harry plan to do great philanthropic work after leaving the...

Eat Out To Help Out could have caused ‘increase’ in coronavirus cases, scientist warns

Prince Harry wears suit after being banned from wearing military uniform as he dishes...