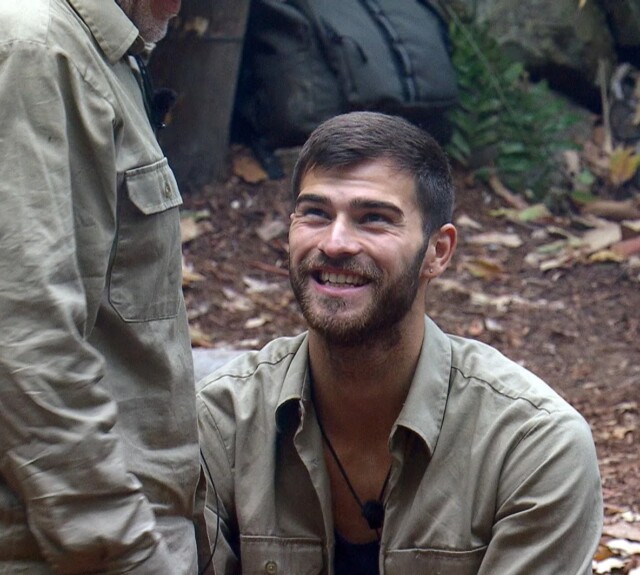 I’M A Celebrity fans were set to propel Owen Warner to the King of Jungle’s throne.

However, it seems some viewers have grown a little annoyed with the Hollyoaks star – because of his constant talk of food.

The I’m A Celeb cast last night got a rare boost when, on a trip to the jungle arms, they were treated to pizza and chips.

Owen made the most of the treat, even staying behind after the others to hoover up the crumbs.

He asked co-star Jill Scott: “Are you sure there’s no more food left?”

However, the lad – who is neck and neck with England Lionesses star Jill to win the show – didn’t endear himself to some viewers with the behaviour.

Others weren’t impressed by that they called “sulking” when he failed to win the task – and a plate of brownies – on Tuesday night.

One wrote: “It’s about time Owen left the jungle, from day one alls he ever talked about is food, he’s getting to repetitive.”

Another tweeted: “I know it must be hard without a lot of food but Owen is taking the p**s now. Sniffing around for crumbs like a dog.

“There’s been bloody heavy weight boxers in there that don’t moan about food as much as him.”

A third complained: “I’m so bored of Owen constantly going on about food!”

Another reckoned he could be voted out, writing: “About time Owen went… Tedious sulks over food boring as hell.”

Others backed Boy George, who had grown tired of hearing about the Romeo Nightingale actor’s hunger on last night’s show.

One wrote: “In fairness Owen constantly obsessing over food is really annoying and we only see about 30 minutes of it so im not surprised Boy George was getting the hump with him.”

However, Owen remains popular among much of the I’m A Celeb fanbase and remains the person to beat this year.

One backer wrote: “You know what, Owen is probably my fave to win at this point! He’s fearless and tries everything!!”

Another said: “If anyone should win it should be Owen, Sean, Baba. The only ones who have contributed to this series. Everyone saying Jill or Mike the boring ones. It seems the winners are now the nicey nice ones not entertaining.”

﻿I couldn’t find love on Love Island but I know Nick is The One,...