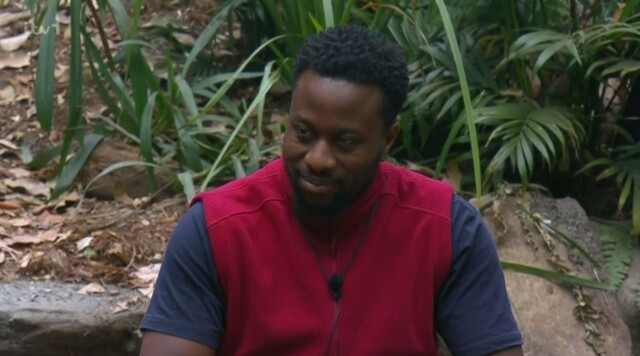 I’M a Celebrity fans were all saying the same thing as Babatunde Aleshe became the fifth person to leave the jungle tonight.

The comedian received the fewest public votes after ending up in the bottom two alongside fellow funny man Seann Walsh.

Baba is the fifth person to leave the jungle

Fans rushed to Twitter to share their thoughts on the exit, with one writing: “Actually gutted to see Babatunde go – Matt best not win this.”

Another said: “NOT BABATUNDE”

And a third added: “Really sad to see Baba go!!”

Following his exit Baba told Ant and Dec: “It’s been crazy – living in it is a whole different experience.

“Watching at home you think, ah these guys are playing it’s all good in there.

“Spending two and a half weeks in there is hardcore. It’s intense. All we do is talk about food.”

Discussing on of his Bushtucker Trials, Baba added: “I feel like I’m more scared of toads now than I was. You guys sprang that one me.

“When they came in, I thought you guys are evil. I don’t like the way they look. They look like they were birthed in the pit of hell. They are demons.”

Did you miss our previous article…
https://hellofaread.com/im-a-celebrity/im-a-celebs-chris-moyles-opens-up-about-rude-run-in-with-elton-john/

Dermot O’Leary and Rochelle Humes hit out at tardy Simon Cowell for always being...

Boris Johnson and Sir Keir Starmer in huge row over whether catching virus in...

I’m A Celebrity’s Ant McPartlin enjoys day out with pal Dec and his wife...

We sampled seven vanilla ice creams to give Brits the scoop on which are...