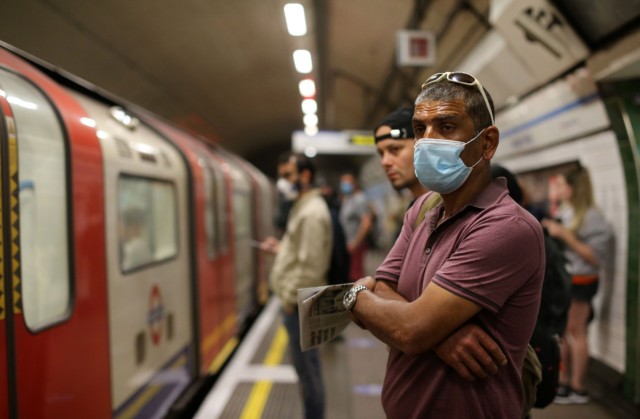 JUNE 21’s grand unlocking hangs in the balance – but even after Freedom Day Covid will continue to cast a shadow over our lives.

While the final stage of Boris Johnson’s roadmap ends legal restrictions on social contact, a “big bang” return to normality is unlikely.

Masks on trains will likely continue

Next Monday the Government will flesh out its post-pandmeic blueprint to give a clearer picture of what the country will look like after lockdown.

A firm decision will also be made then about whether to push ahead with June 21 – with ministers reportedly mulling whether to delay by as much of a month.

Here we take a look at what restrictions could be lifted on June 21 – and what might be here to stay.

Masks will likely remain a feature of our lives in some form for the foreseeable future.

After scepticism from boffins in the early stages of the pandemic, Britain finally fell in behind other countries to mandate their use in public indoor spaces.

And because they are of relatively little hindrance to everyday life, masks could be kept in place for tightly-packed settings such as buses and trains.

Individual workplaces will likely issue their own guidance to employees on whether they should wear face coverings inside.

Pubs and restaurants have been hammered by Government’s restrictions and left significantly out of pocket by months of lockdown.

The PM will wish to give landlords reason to raise a glass on Freedom Day by giving their business a boost.

Last month he told Tory MPs the one-metre plus social distancing rule could be axed to allow pubs to squeeze in more punters.

Drinkers could also be allowed to stand at the bar for the first time in months rather than forced to choose their tipple from the table. Ministers are desperate to lift the six-person limit for indoor mixing and will strain every sinew to scrap it for Freedom Day.

But scientists are wary that the virus spreads easier indoors and any easing will likely be tethered to advice to keep rooms ventilated with fresh air.

The PM recently joined thousands of newlyweds to tie the knot in a pared-back ceremony because of the 30-guest limit.

His surprise marriage to Carrie Symonds at Westminster Cathedral spurred fears that the cap would not be removed after Freedom Day.

Vaccines Minister Nadhim Zahawi said: “I wouldn’t extrapolate anything from that.”

Scrapping the guest limit was central to Step 4 of the roadmap and ministers will be keen to press ahead with letting couples celebrate their perfect day.

Whether or not to end the work from home guidance is still a live discussion in Whitehall.

It is a tricky conundrum for ministers – not least because it is not clear how much weight their advice actually carries.

Despite no change in the guidance, city rush hour has become visibly busier in recent months.

On the other hand some businesses have made clear their intention to continue home-working in the foreseeable future.

After the first lockdown last year the PM was quick to call on Brits to get back to the office to breathe life back into the cash-starved high street.

Although Mr Johnson is markedly less gung-ho than he was last year, it is probable working from home guidance will be binned some point soon. Restrictions will continue hamstringing holidaymakers for many months to come Brits will be asked to continue testing and isolating

Brits will be asked to continue testing and isolating as the part of the Government’s strategy to keep Covid cases down.

Testing capacity has been dramatically scaled up in recent months so everyone has access to twice-weekly lateral flow kits or PCR swabs if symptomatic.

Even vaccinated Brits will likely be asked to self-isolate if pinged by the NHS app until scientists get a clearer picture of how effective jabs stop transmission.

Restrictions will continue hamstringing holidaymakers for many months to come.

Ministers have made clear they won’t compromise the roadmap for the sake of overseas trips.

Quizzed about restoring international travel this week, Health Secretary Matt Hancock said the “the return to domestic freedom… has to be protected at all costs.

Holidays will likely be limited to a handful of green list countries for the rest of the year while the world catches up with vaccinating their populations.

Michael Gove is currently leading a review into whether “Covid-status certification” should be rolled out – but the idea is understood to be dead in all but a few settings.

Ministers were initially adamant they wouldn’t be used domestically but that vaccine passports could facilitate overseas travel.

Mr Gove was tasked with evaluating their effectiveness after Israel started using “green cards” for jabbed citizens to prove their status at venues.

The Cabinet Office Minister has suggested they could be used for large-scale gatherings such as football matches or festivals – and they are expected to be used in the Euros.

But the PM has ruled out needing “papers for the pubs” on Freedom Day and is understood to have cooled on their widespread use.

Foreign Office staff worked from home and boss stayed on holiday as Afghans were...

Boris Johnson promises business bosses Brexit will be done in WEEKS if he wins...