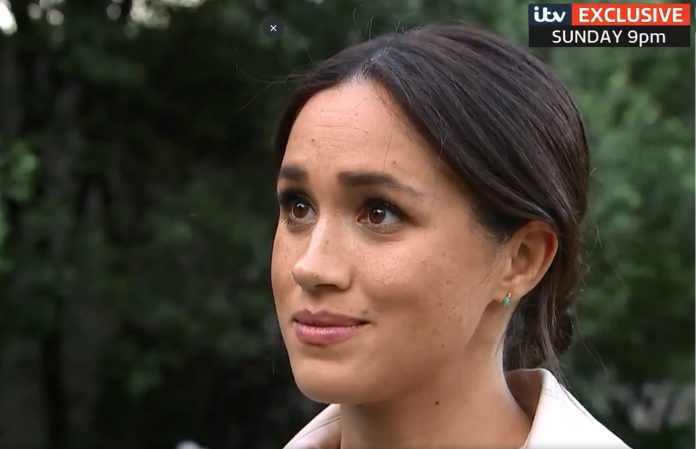 MEGHAN Markle received a huge outpouring of support from over 70,000 fans after she appeared close to tears discussing the difficulties of motherhood.

The hashtag “WeLoveYouMeghan” was the top trend on Twitter in response to the footage, in which the Duchess of Sussex described herself as having felt “vulnerable”.

An ITV documentary called Harry and Meghan: An African Journey, which is set to air tonight, follows the royal couple’s recent tour round the continent and delves into the effect intense media scrutiny has had on Meghan.

In a preview clip of the programme, Meghan revealed her new royal life has been “a struggle” adding: “Not many people have asked if I’m OK.”

The programme comes amid reports that the Duke and Duchess of Sussex are looking to build a new home in Botswana to lead a more private life and “focus” on Africa.

On Twitter, the caring hashtag began trending within an hour of British writer Greg Hogben urging people to share their support.

Some accounts even began circulating Meghan’s address so fans could send letters of encouragement.

In the documentary, Meghan replies to a question about her physical and mental health by describing the recent difficulties she’s gone through since becoming a royal and new mum.

She tells interviewer Tom Bradby: “Look, any woman, especially when they are pregnant, you’re really vulnerable and so that was made really challenging.

“And then when you have a new born, you know… And especially as a woman, it’s a lot.

Meghan continues: “Also thank you for asking, because not many people have asked if I’m OK.

“But it’s a very real thing to be going through behind the scenes.”

Bradby asks her: “And the answer is, would it be fair to say, not really OK, as it’s really been a struggle?”

At this point, Meghan looks visibly upset and replies: “Yes.”

Speaking ahead of the broadcast of tonight’s programme, Brady toldThe Sunday Times he thought the royal couple are “vulnerable and bruised”.

In the hour-long documentary, Harry reportedly expresses a desire to leave the UK.

Although Harry later concedes such a move might not be possible.

A royal source told The Sunday Times: “The Duke and Duchess have a full schedule of engagements and commitments until mid-November, after which they will be taking some much-needed family time.”

As hundreds of migrants wait to cross the Channel, a £420k drone designed to...