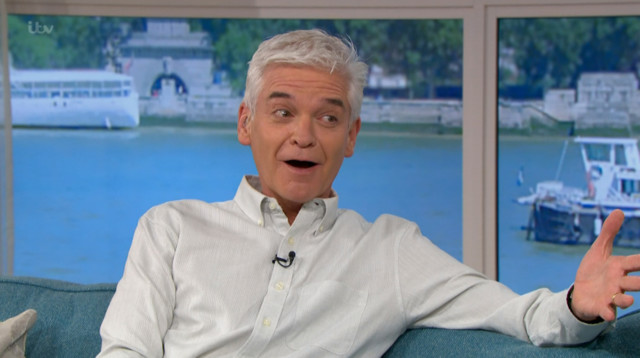 This Morning host Phil’s brief appearance on The Me You Can’t See came as Harry talked to Oprah Winfrey about the press interest in his life since childhood.

The presenter defended previously Harry and wife Meghan Markle’s first interview with Oprah earlier this year, and a clip of him played saying: “We are starting today with a story dominating headlines around the world this morning.

“Last night, after weeks of speculation, we finally got to hear Harry and Meghan’s story as they sat down with Oprah for a tell-all interview.”

Harry reflected on the 90-minute special in which he talked about breaking the cycle of suffering that’s caused by growing up in the royal family. Harry talked about press interest in his life

He said: “I like to think that we were able to speak truth in the most compassionate way possible therefore leaving an opening for reconciliation and healing.

“The interview was about being real, being authentic, and hopefully sharing an experience that we know is relatable to people around the world, despite our unique privileged position.”

During the candid docuseries Harry revealed he was “angry” at the British public for mourning his mother Diana because they “never even met her”.

The Duke of Sussex opened up about the pain of the death of his mum, who died in a car crash in August 1997 when he was just 12. Princess Diana died in a car crash in August 1997

Harry addressed traumatic memories from his childhood – including the moment he was photographed with his brother, uncle and grandfather walking behind Diana’s coffin at her funeral.

The 36-year-old, who was just a young boy at the time, also expressed his frustration that the country grieved for his mother, despite not knowing her personally at all.

He told his series co-host Oprah Winfrey: “When my mum was taken away from me at the age of 12, I didn’t want the [royal] life, sharing the grief of my mother’s death with the world.

“For me, the thing I remember the most was the sound of the horses’ hooves going along the Mall.

“It was like I was outside of my body and just walking along doing what was expected of me.

“(I was) showing one tenth of the emotion that everybody else was showing: This was my mum – you never even met her.

“I was so angry with what happened to her and that there was no justice, at all. Nothing came from that.” Princess Diana carries Prince Harry on her shoulders in 1986 The Duke of Sussex spoke with Oprah Winfrey In the programme, he discusses his own mental health struggles and those of his wife Meghan Markle

Harry also revealed that members of the Royal Family told him to “just play the game and your life will be easier” before he left for the United States.

“I feel as though I am outside of the system – but I’m still stuck there. The only way to free yourself and break out is to tell the truth.”

The series focuses on mental health, with Harry telling Winfrey the trauma of the loss caused him to suffer anxiety and severe panic attacks from ages 28 to 32.

“I was just all over the place mentally,” he said. “It was a nightmare time in my life.”

“Before I even left the house I was pouring with sweat. I was in fight-or-flight mode.

“I’m freaking out every single time I jump in the car, or see a camera.

“I would just start sweating. I would feel like my body temperature rise and I’d convinced myself my face was bright red.

“It was embarrassing. Everyone’s looking at me. One bead of sweat feels like the whole face is pouring down Just sweating.

“They have no idea. I can’t tell them. Everywhere I go, every single time I meet someone, it’s like I’m being drained of energy.”

How much does it cost to run a PS5?

Is Prince Charles’ behaviour fit for a future king?

At least 80 per cent of Brits must download new coronavirus tracking app for...