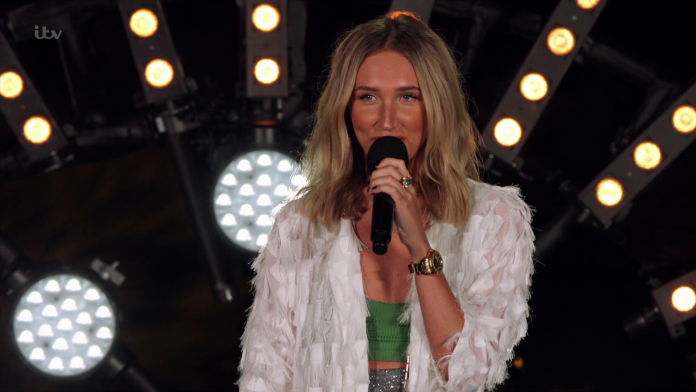 X FACTOR Celebrity fans have pointed out that Megan McKenna’s “brand new” song has already been a hit on her debut album.

Megan’s emotional performance of Everything But You got a standing ovation from the judges on Saturday night.

But now viewers have realised the song featured on her album Story of Me, which was released in December 2018.

She teamed up with Ed Sheeran’s songwriter to pen the heartfelt lyrics after being inspired by a trip to country music capital Nashville.

One said:“Umm…so are we just supposed to pretend that Megan McKenna doesn’t already have an album out #XFactorCelebrity.”

“Megan Mckenna singing a song from the album she released last December. Hope she lands that record deal. #XFactorCelebrity.”

“Celebrity X factor ……Megan McKenna track available on her album which was released in December last year …..which makes a mockery of this daft Cowell crap….”

Another added: “”Are we just supposed to pretend that Megan McKenna doesn’t already have an album out?”

Megan has been open about her quest to break into the music industry following back-to-back TV shows.

She travelled to Nashville in 2017 to film her fly-on-the-wall show Theres Something About Megan.

The series followed her ambitions to become a singer.

Last July she even nabbed a slot supporting American croonerMichael Buble when he performed at London’s Hyde Park.

This weekend Megan made it through to the live shows of X Factor: Celebrity.

She broke down in tears in front of judges Simon Cowell, Nicole Scherzinger and Louis Walsh, telling them: “You don’t know how much this means to me.”

The 27-year-old star rose to fame on Towie, Ex On The Beach and Celebrity Big Brother.

Coronation Street’s Georgia May Foote wows fans as she strips to a towel for...

Prince Harry & Meghan Markle may be ‘cut’ from Royal family in Prince Charles’...

The Masked Singer’s Davina McCall hits back at troll calling her ‘old and wrinkly’...